October 25, 2016
We decided to check our suspension travel and force load cells we use to determine the down force on the car.  We have been calculating the travel and forces but it was time to find it empirically. We set up scales and then put the weight of the tractor on it to get numbers.  The wheel scales were compared to the numbers we get from the measuring devices on the car.
We are not expecting to do much more for a long while.  The car has been pushed to the corner of the shop. 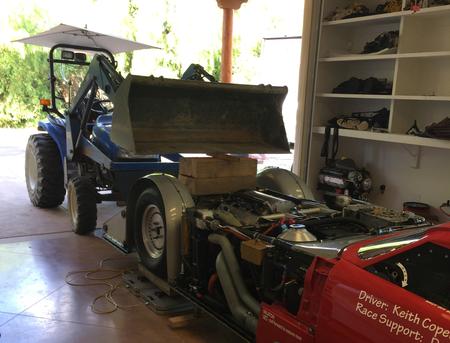 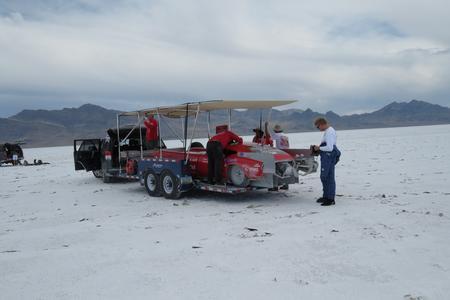 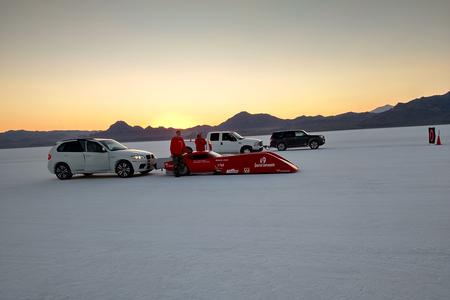 The track was just too slippery and bumpy for us to make a fast run at Speed Week this year.  We did spend some time getting the motor tuned for more HP.  If we can get a good track later this year I hope we can go fast. We will evaluate the track for the September and October events.  The track locations for the next events are likely to be at different locations on the salt.

We concluded our testing this week with a 5 mile run.  We are trying some new things to make the car faster for Speed Week.  Some worked and some did not. The Moran motor and new Weismann transaxle worked great.  Our next running will be Speed Week August 13th.

The race car is just waiting for the summer to come and hopefully create a usable track this year.

Even though the car sits for the winter it does not prevent the electronics from having problems. With four computer control units for data collection, transmission control and engine control there are hundreds of feet of wire and many connections.  The salt flats are the last place you want to run electronics. Even with sealed connectors each one needs to be cleaned and resealed to prevent electronic gremlins from appearing.