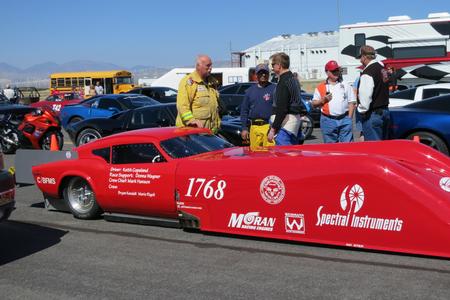 We rented the Spaceport America in New Mexico to test our new transaxle. It has a nice new 2 ½ mile long runway. The place was shut down and we had the runway to ourselves. During the test we turned up a problem with the electronics that controls the shifting. Bad to have a problem, but that's why we are testing before we race.

The car spun a few times at about the 3 mile but it stayed on its wheels. However, enough damage was done that we were finished for this event. The track was not very good but It looks like a lot of little changes we did added up to bad handling. We will reset everything back to the way we had it when it was stable. Yes, theoretically the basic physics are on our side, but front wheel drive and proper physics still do not guarantee a stable car. There are still a lot of things to get correctly set up. 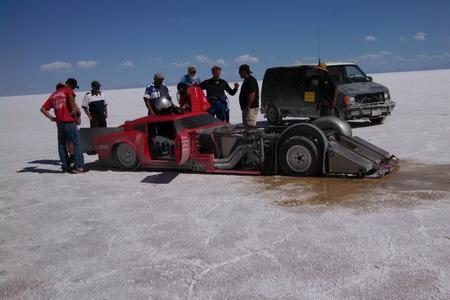 We just completed a 2 ½ day test on the salt. The good news is that the new transaxle from Weismann performed well. This was one of the main things we went out to test. All the data logs from it looked good and we did not see anything wrong when we tore it down after the runs. We also wanted to work on some new engine mapping and larger injectors. This part did not go as anticipated and we had some unexpected engine headaches. Nothing too bad, but it did slow our testing down. Our best time to the 3 mile marker was 314 mph. This is short of what we need for a good fast run. The soft salt and the new trans learning curve did not make for very good times. 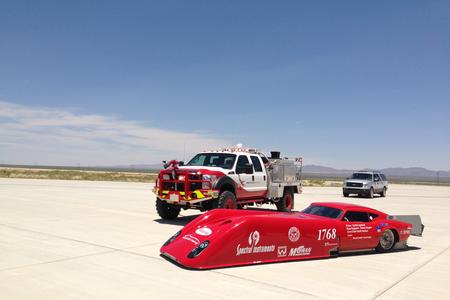 Our testing at the Mojave mile in April turned up a major problem with the function and design of the differential part of the transaxle, so the differential was very quickly redesigned and remade​