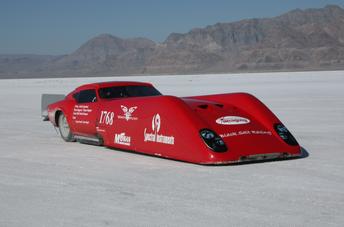 It has been a hard struggle to get the car ready for Speed Week.  The transaxle has been the main issue.  In order to have a chance at running it had to be without 1st and 2nd gear, which we made wrong.  That makes for an extremely fast push off and even then, the car will bog down the motor at the start. The transaxle was finally assembled and spun tested at Weismann mid-week.  Then it was driven out to the race shop and installed in the car.  We were able to successfully run from 3rd to 8th gear on jack stands.  The car was then loaded in the trailer and transported to Bonneville.  We got there as a storm blew through the salt flats.  Another storm came through that night and totally flooded the track and the pits.  They canceled the race before we could even unload.  The car is now headed back to the race shop to pull the transaxle.  It will get shipped back to Weismann to get the lower gears installed before the World of Speed race early September.

The link below is to the PC version of the video using  browsers if you do not have VR goggles.  This way of viewing can be a bit buggy depending on your browser. 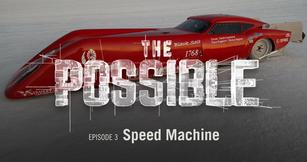 The race car began as a 1971 Triumph GT-6
The car has been modified per the SCTA rules from the cowl forward and stretched to a 130 inch wheel base. The top has been chopped 5 inches, and the chassis and suspension are all custom fabricated. The engine is a Brodix (Chevy) block and heads, V-8, 360 cu/in. twin turbo charged with ice water intercooling.  Boost is variable up to 40 psi.  HP is about 2800. It is a front wheel drive car.